Smokejumping operations were successful on the Island Fire in the Marble Mountain Wilderness today. The fire remains at 3 acres.

There are approximately a dozen additional fires within the River Complex. The largest of these fires includes the Cronan fire, which is located 3.5 miles NNW of Sawyers Bar and is approximately 20 acres, burning to the northwest. It was staffed today with hotshots supported by air resources. The Graham Fire is 3 miles north of Matthews Creek Campground, burning on a ridgetop. Two hand crews, a dozer and an engine are on scene working to contain this 3-acre fire. The Haypress Fire is roughly 20 acres burning on the north side of I Am Up Ridge, 2 miles southeast of Shadow Creek Campground. The Summer Fire is roughly 3 acres and near the Trinity Alps Wilderness, east of the China Gulch Trailhead. Both the Haypress and the Summer fires are being monitored by air until crews can get to them.

The rest of the fires on the River Complex are less than an acre in size. Information is continuing to come in from the field as the fires are staffed and may change as better intel is acquired.

Numerous resources from outside the Klamath National Forest are working on these fires to supplement local suppression resources, including Smokejumpers, heli-rappelers, and contracted fire engines and hand crews. CAL FIRE’s Siskiyou Unit is also providing assistance. Additional resources have been requested to support suppression operations.

AA just ordered 2 type 3 tankers for the Summer and a bucket ship for the Packers. Also ordered 2 tankers, any type, for the Haypress.

There are at least 23 fires now total in the complex.

Edit: Forgot to mention, there were cumulus buildups over the Marble Mountains earlier this afternoon and some rain showers in the Scott River Road area north of the complex. Most of that has cleared now.

That’s the SHF Monument Fire, which is not part of the River Complex.

EVACUATION WARNING
An EVACUATION WARNING has been issued for the Forks of Salmon and Sawyers Bar areas of Siskiyou County due to the multiple wildfires burning in the Klamath National Forest. This is a WARNING only at this time. Be alert and be ready to go in case an order is issued in the future.

I was looking for feature names for the given perimeter but, wasn’t sure which it was given many fires starts. That is why I say " I believe" in many of my posts. I do get it wrong at times.

I do get it wrong at times.

Me too! My post wasn’t intended as a criticism, there are a bunch of smaller fires in ther area right now and it’s hard to keep everything straight.

Today will also be a transition day away from thunderstorms for most areas toward hotter, drier, and eventually, windier conditions. RFWs are not anticipated today for wind, RH, or Haines Index, but it will be drying out from SW to NE. The Rogue Valley (gusty afternoon northwest winds) and the Shasta and Scott Valleys (gusty south winds today) will likely see a period of RFW conditions, but not long enough for a warning. Also, Haines will be a 5 or lesser, except over California`s River Complex, where a 6 is expected. Tuesday into Wednesday it will be hotter and drier, as well as windier and unstable. Red Flag Warnings will likely eventually be needed for areas from the Cascades east for low RH/winds and a forecast Haines Index of 6 over the Bootleg fire. This will be followed by a notable cool down late week into the weekend. Wednesday looks like the day where the fire weather environment will be the most critical. Thursday will feature gusty winds again, but humidity should trend higher on Thursday too. 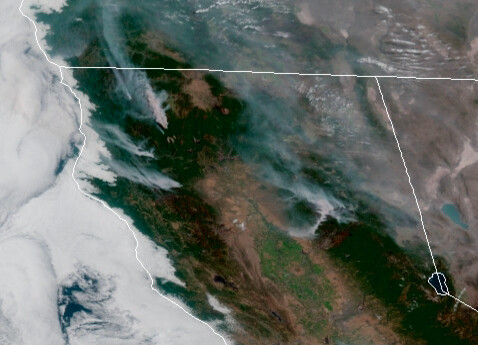 NWS this morning. Kinda telling when it comes to thin resources.

From Etna at 9:50 a.m. looking SW toward Salmon Mountain.

Might be the Summer, not the Haypress, that’s gotten active. AA overhead, just ordered 4 type 1 tankers and a lead for that fire.

Just heard the same…names are getting confusing given how many fires there are, but at this point, they might have merged into one given their proximity.

There is an EVACUATION WARNING from Taylor Creek Road to Caribou Road along Cecilville Road continuing to areas of Summerville following the South Fork of the Salmon River due to the unpredicted fire behavior in the Klamath National Forest.

This is a WARNING only at this time. Be alert and be ready to go in case an order is issued.

I agree. Can already see the capped column clearly from Red Bluff in the Sac Valley - wow. Summer Fire is what my alignment shows, although this far out it can be anything in the River complex.

Haypress is the big heat signature and the summer is catching up to it. 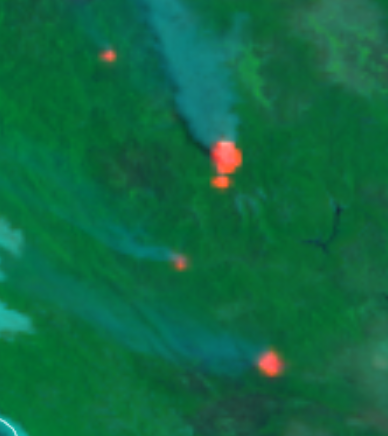 Finally found it on camera.
http://www.alertwildfire.org/shastamodoc/index.html?camera=Axis-HerdPeak&v=fd40730

There has been a lot of fire activity since my last update. The three fires that are really putting out heat and growth in the Salmon River are Cronan Fire, Summer Fire, and Haypress Fire.

Cronan Fire:
Last estimated at ~150 acres yesterday, it looks like it has grown a bit since then. The head of the fire as of yesterday was at the upper Garden Gulch Trailhead. The fire seems to be mostly moving NE into upper Garden Gulch drainage. It appears that it will continue to move in this direction. It is burning in the 2013 Salmon Complex fire footprint. Crew 4, Egine 345 and a falling module make up the North Fork Division, and are keeping an eye on this fire and assessing if there is a need for structure protection.

South Fork Fires:
Shadow Fire: A fire popped up in Shadow Creek that was a high priority due to resources at risk. Crews worked this yesterday and through the night, They got it lined and a hose lay in and feel pretty good about it going into today.

Haypress Fire: Estimated at ~400 acres as of yesterday evening, this fire has grow considerably and is continuing to grow as a pretty fast pace. It is backing more towards the NW into Henry’s Gulch in the Taylor Creek drainage, but also moving in upper Garden Gulch on the South Fork. The Fire is moving in heavy timber, and fire personnel are hoping to be able to knock it back a bit and slow its progress if they can get air resources to dump water on the edge where it is moving towards Rush Creek. The fire was around 1.5 miles out from Taylor Creek properties at around 4am this morning. JUST IN: Haypress Fire seems to be spotting out ahead a half mile or so and is much closer to properties in Taylor Creek area than thought.

Summer Fire: This Fire was reported at 50 acres yesterday but has clearly increased in size a lot since then. New intel indicates that it is also moving quite fast down hill and spotting out ahead of itself about 1/2 mile.

Both Summer and Haypress Fires seem to be blowing up at the moment and are being wind driven downhill. This is a scary situation, please stay attentive and consider getting your livestock to a safer location. With very few resources on the fire, and new fires popping up everyday, no structure protection has been done at this point. See Haypress Fire photos from the same spot yesterday and today.

There is a Type II team coming in to take over the fire tomorrow. They are shadowing fire personnel tomorrow. Hopefully this will allow for more resources. There was word of a fire camp being set up at the Petersburg Fire Station in the upper South Fork but that location might change depending on the fire activity and number of resources. A main camp is starting to setup in Etna.

All maps are from heat detections from around 4am this morning. Remember that satellite heat detections are approximate and the red or orange circles around them are not fire polygons, but the margin of error. 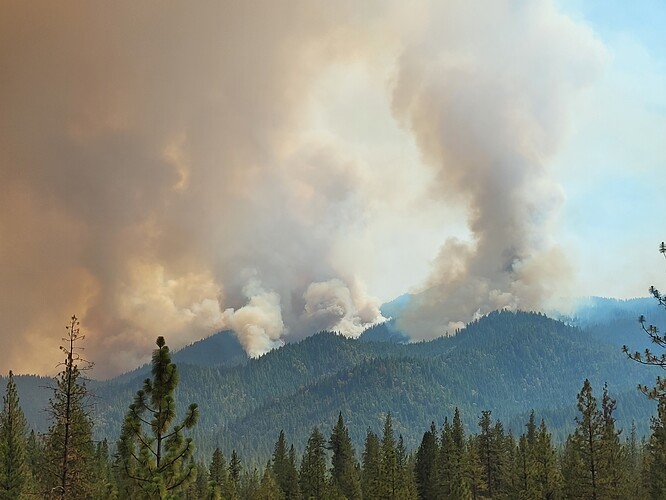 Summer fire at about 1600 today, from Petersburg.

Haypress has burned nearly down to the river about half way between the East Fork campground and S. Taylor Road. The focus this afternoon was structure protection. About 1800 the Haypress got pretty smoked in and fire activity moderated.

Wrap up of the fires in the complex from the morning radio briefing:

Island Fire- 2 ac, looking good. Plan to demob personnel tomorrow.
Summer Fire - 200+ ac, unstaffed. Spots to the west moving onto SHF.
Cronan Fire - 175 ac, staffed with one engine doing structure prep and assessment.
Haypress Fire - 1000+ acres, very active, defensive firing conducted along the South Taylor Road to the Salmon River yesterday. This fire has the majority of values at risk so most of the resources in the complex are assigned to it.
Border and Long fires - jumpers working these fires.
Camp [Kemp?] Fire - 1/2 acre, 2 jumpers on scene
Ruffey Fire - should be declared out today
Trailhead Fire - continuing mop-up

May need to use pack trains for logistical support, air resources are thin and the smoke is thick.

Fire camp being built in Etna.

Transition to the incoming team should occur at 1800 hours today.