Looks like a return of the 747 is in the works. Anyone else heard more than what’s in this article?

747 Supertanker expected to return to service in 2022 - Fire Aviation

The retardant delivery system to be reinstalled in a different aircraft

What’s the definition of insanity?

Never saw one drop, but never heard good things about the way it Delivered it’s payload. 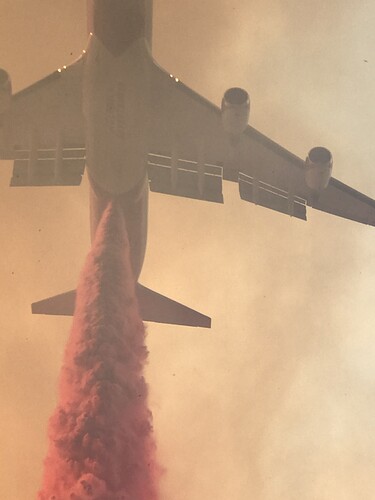 It laid on my engine really good on the River/ Ranch

They ran a very effective social media campaign using those fires in South America to play peoples feeling which in turn put pressure on politicians. Saw it work enough to form my own opinion, badly missed drops like the one it did on the mission fire and doing circles for 20 minutes before dropping on the creek fire don’t give me any reassurance that it will be effective. It got showed up by the S2s, C130s, DC10s, and helitankers on that. It’s really good at campaign and media drops.

No way a plane is converted, pilots trained, ground crew and maintaince on line and company certified and signed off to fight fires in 2022. 2023 would be optimistic.

laid on my engine really good on the River/ Ranch

It killed a man on that same fire IIRC.

Of course we can’t be sure of the causes, just wanted to mention it.

Is John Winder still involved with Global ?
" As Assistant Deputy Director, Fire Protection, for CAL FIRE from 2011- 2013, Winder was responsible for statewide operations including all mobile equipment, Aviation Management and Tactical Air Operations"

“Today, Winder serves as Chief of Operations for Global SuperTanker Services, LLC, a company operating the world’s largest firefighting air tanker. In this capacity, reporting directly to the company’s president, he provides oversight of all fire operations ensuring effective, safe and efficient operation of the company’s tanker.”

I noticed in the comments section of the article someone mentioned the clear airspace issue for this plane. Curious if there are any ATGS out there that can explain what the difference in requirements for this (admittedly larger) airplane is versus the DC-10’s. I inferred from the comment it was significant. Also, cost wise versus the DC-10’s, any finance people have a seat of the pants percentage increase?

) me to always be a little wowed. I can only guess what the experience of a 747 would be, although @FC3363 picture give me a hint.

It’s a real “lookscool” effect. People see videos of it swooping in to “save” the day, when it’s entirely likely a bunch of smaller planes would have been better. There’s at least a dash of that with the CL-415s, with certain well-versed people being, let’s just say … skeptical … as to their effectiveness on large fires. But they make for dramatic Youtube videos, and have a simplicity that people respond to.

I’d feel a lot better if that money was spent on bringing a half-dozen P-3s back into service.

No aircraft delivering retardant is effective after the first burn period. Outside of structure or immediate life threat, it’s just a show after the first burn period. It’s unfortunate that the retardant study has found that to be true, because it makes tankers sound useless, when they actually have a huge impact on IA in conditions where the weather and current local environment allows it to be effective. There is plenty of IA done, but the bulk of the flying is done on campaign fires - examples that everyone here is familiar with are the Dixie and Caldor fires. You just don’t hear about the tons of smaller fires that happen frequently and are contained in the first burn period because that doesn’t sell to the media. Tanker crews used to have 100 hour parties because they only flew IA. Now it’s common for a tanker to fly 400+ hours every year, and they’re twice as fast, but cost tax payers 5x’s as much. Scoopers and helicopters are much more effect at extinguishing fires because they deliver water, directly to the flames. Some regions love scoopers, others have some weird old school Mentality and think they are useless, yet Bogart them and never use them, when other regions would be happen to have and use them and believe in them.

The P-3’s are a much different and complex situation.

Do you have that study? I ask because I would have to absolutely disagree. Fixed wing can make a huge difference on spot fires, slop overs, burn prep etc. I’m very curious the context of the concept that tankers don’t help after IA.

I forgot the name of the study, and I think there is an on-going one. But it’s out there.

Each asset in the tool box when used appropriately is great, whether it be SEATs, S2s or LATs and VLATS.

I would agree the VLATS have there place. Have had the green side of many dozer lines treated for slop over and spotting and been very effective

Really would like to read it when you google upon it, thanks

If you really look into the operation side of aircraft on a fire, water scooping fixed wing should not be counted as fixed wing. They are direct attack aircraft, dropping water or foam directly on the fires edge, the same as helicopters. Their role is extinguishment of the fire, not "slowing down the fire with restardant.

If I had to choose between the scoopers or helitankers, and I include CH-47’s and S-64 in the word *helitankers", I’ll take the later 2 anytime, day and night due to their load capacity, where they can get water from, ability to pinpoint drops, and the lovely colors that come out of those tanks, and capabilities year around. And add in the Firehawks and you have a very good air force for direct attack/extinguishment.

As for the 747, as stated before fixed wing have a different mission than helicopters. There are very few air attacks or air operations personnel that just want to fly aircraft around the fire to give local and national media a “CNN moment”. They are belong to the principal of "Risk Vs. Gain. And they live by that every time they fly or put another tanker pilots in the air, be it a IA grass fire or a extended attack fire. I personally know 2 of the senior leadership when Global Supertanker Services flying. They are 2 of the most dedicated individuals with many years of fire fighting experience on the ground as well as in the air, and their support staff was just as good. They would “NEVER” put any aircraft in the air just for a show. They respect life to much and would not in-danger lives on the ground or air just for “a show”. If there are air tankersin the air I would bet the air Attack Officer, along with his pilot, and a Lead Plane crew as well, truly believe they could help slow down the “freight train”, running full throttle below them.

How many times have you heard the IC talking to Air Attack, be it day 1 or day 7, telling that person in the sky, with 6 radios in their ear, if you can help slow it down before it gets to the homes or go direct on the homes just starting to catch fire? Just giving up is a hard pill to swallow for those having to coordinate a fixed- wing and helicopter show, knowing what the end result will look like, especially if your friends home or your own home is about to catch fire. I believe it is taking a shot, or attempting the hail Mary, not a CWN moment.