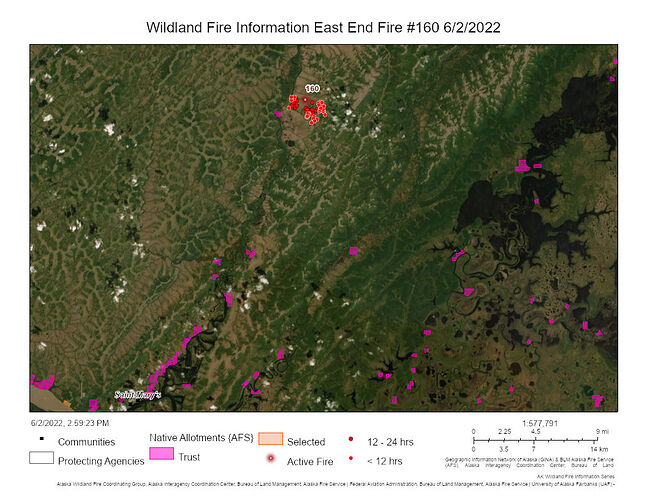 Smokejumpers anticipate having a few days of work ahead of them to ensure the East Fork Fire won’t impact the allotment. Additionally, this will allow fire personnel to be in the area if they are n…

On Saturday, the Alaska Type 2 Incident Management Green Team will take over management due to its proximity to numerous Native allotments, historical sites and communities. 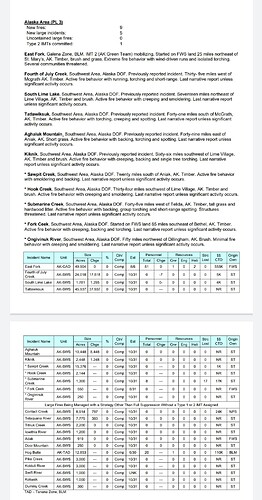 ST. MARY’S, Alaska. – The progression of the East Fork Fire has slowed due to moderated temperatures and a wind shift from the north to the west. The fire edge remains more than three and a half miles from St. Mary’s. Gusty, northerly winds have driven the fire toward communities for the last week, but the wind direction has shifted to the southwest and cooler, damper weather is expected over the next few days. This weather window provides an opportunity for direct attack and firing operations that will increase protection for communities.A community meeting will be held at the St. Mary’s elementary school today, June 13, at 4 pm. The meeting will also be live streamed on Facebook.Operations: Today smokejumpers will begin to work directly on the edge of the 29-mile western edge of the fire. They will work northward and be supported by water drops from scooping aircraft. Drones, also known as unmanned aircraft systems (UAS), will use Plastic Sphere Dispensers (PSD) to drop plastic balls along the southern toe of the fire between the Andreafsky River (North Fork) and the East Fork. The plastic balls ignite from a chemical reaction approximately 20 to 30 seconds after being dropped. The UAS can fly close to the ground so that the PSD can effectively and accurately fire an area with minimal risk to firefighters. Burning off the vegetation in this way creates a further break to slow down or stop fire progression. In addition, crews will improve an existing fireline constructed by a local fuels crew around the community of Pilot Station and prep cabins on allotments to protect them from fire. Work also continues to secure the area around the East Fork fish weir.Aerial monitoring of both the East Fork and Apoon Pass fires will continue to occur daily in order to identify any allotments or structures that may be at risk. As a reminder, temporary flight restrictions remain in effect (Federal Aviation Administration - Graphic TFR's).Evacuations: No mandatory evacuation order in place. Voluntary relocations are continuing for St. Mary’s, Mountain Village, Pitkas Point, and Pilot Station. Residents are sheltered temporarily in Bethel with support from the Red Cross and Yukon-Kuskokwim Health Corporation. Ready: St. Mary’s and Pitkas Point are currently in “Ready” position.Set:No communities at this time.Go:No communities at this time.Weather: A wind switch to the southwest is a significant change in the weather that will help push the fire away from communities. With this weather change, fire behavior will be moderated with cloudy skies, cooler temperatures, and higher humidity. The wind is predicted to shift back to the north by Thursday. With the wind switch, smoke will be mostly dispersed toward the northeast, but additional firing operations nearby could still contribute to smoke in the area. East Fork Fire Information:
Phone: (907) 290-2852
Email: 2022.eastfork@firenet.gov
Statewide Fire Blog: akfireinfo.com/
Facebook: facebook.com/BLMAFS
Website: inciweb.nwcg.gov/incident/8148/

Scattered rain showers provide favorable weather to dampen fire activity and significant stretches of the fire edge have been contained.

The strategy for the East Fork Fire is to confine or suppress approximately 58% of the fire boundary, the southern portion outside of the wilderness boundary. The northern portion of the fire (about 42%) is burning into the Andreafsky Wilderness and the strategy there is point protection of allotments, but not to control spread of the fire. Of the 58% of the boundary that will be contained, 67% has been completed.

A slow-moving low-pressure system is coming in from the Bering Sea and bringing scattered showers from the southeast. There is a chance of scattered thunderstorms today through the evening and lingering into Saturday. Winds will be from the east-northeast on Saturday and shifting from the east on Sunday.