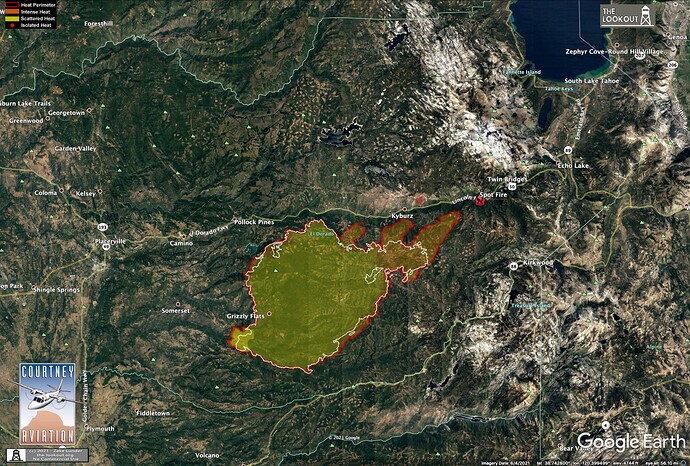 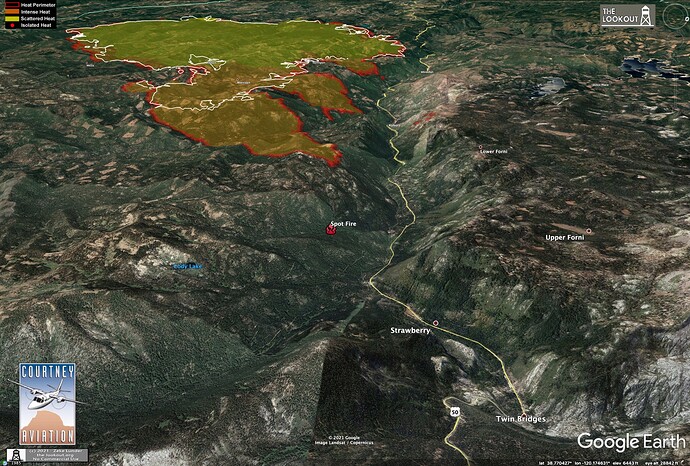 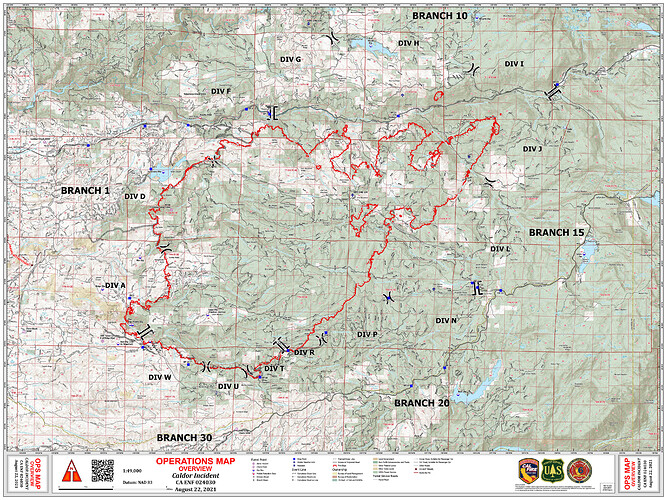 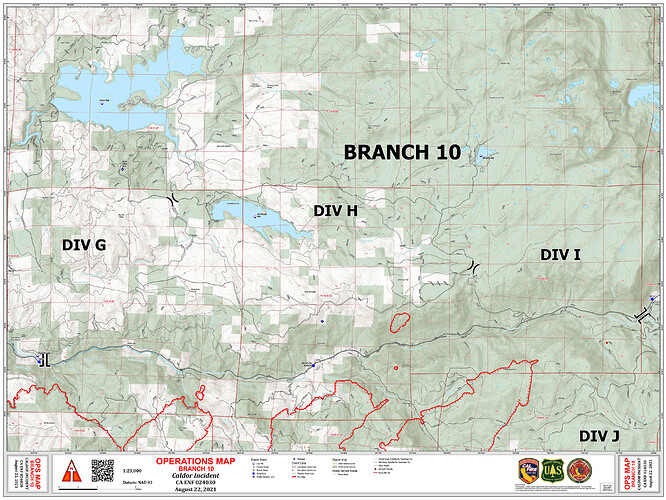 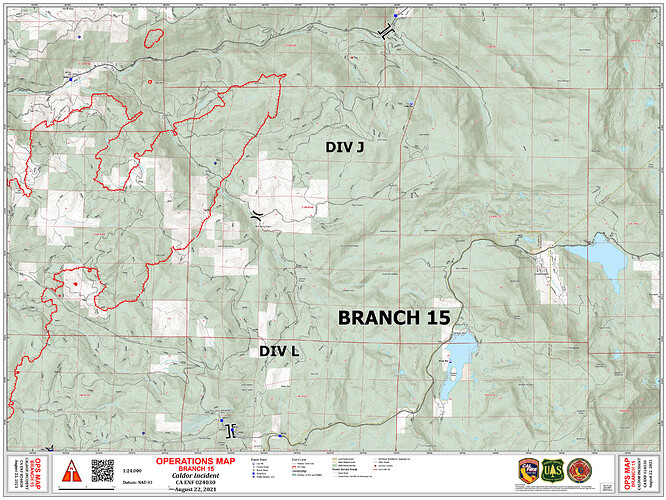 From the morning update: 98,149 acres still with 0% containment. Now up to 328 structures destroyed and 19 damaged with damage assessment ongoing. We’re now up to 1,604 personnel assigned, with the increase coming in additional crews and engines. Note also, as reflected in the maps posted by Fire955 that they have added a new Branch 15 to the fire.

For some points of comparison, the 2007 Angora fire destroyed a total of 254 homes and damaged 26. The 2014 King fire burned a total of 97,717 acres and destroyed only 80 structures. Eight days in though, it had burned 82,018 acres it was 17% contained and already had over 5,000 personnel assigned. Eight days in was also the point at which some light precipitation and increasing humidity really kicked in as factors slowing the growth of the fire. Note that there is a fairly complete history and timeline of the King fire at Wildfire Today.

2 posts were merged into an existing topic: IAP’s/Maps/Updates

Thanks for posting this @Capt9110, what truly stands out this season is how stretched thin resources are. 1600 personnel after 8 days in on a fire this size is truly remarkable and troubling at the same time. California fire service agencies, local, state and fed are being tested like never before. Keep up the strong work and stay safe above all else.

From this AM’s 209 Critical Resource Needs, keep in mind each number represents how many strike teams, not individual resources, these numbers are sobering.

Yes that’s probably less that 16 people per mile of fireline.

Is that accounting for 24 hour shifts?

Nope. so 1/8th mile person? That assumes the perimeter is only 100 miles, too.

Don’t forget resources timing out, any type of a reserve capability, or any contingency plan.

I measured the spot fire last night on Branch 15 from the main fires edge. The spot is .95 due west of Cody Lake and 4.5 miles east of Silver Fork Road (main fires edge). This is based on VIIRs detection at 16:01 hours which means that at the time the ember cast threw the spot in the heat of the burning period it cast out a spot which ignited at 4.5 miles away at least. We’ve seen other impressive long range spots on this incident and well as others this season. It is worth considering that we should expect more of this type of fire behavior in this country, given all the conditions. Picture is taken from todays incident IAP. 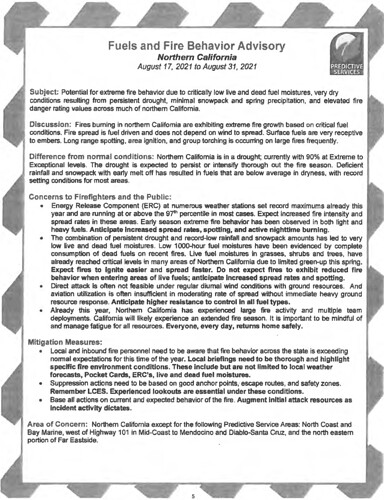 Lots of chatter on the radio right now regarding fire across Camp Creek in DIV D. They’re trying to slow it down with copters and are also discussing ringing the structures with retardant. Lot’s of structures above the drainage.

First picture is a shot from CalTopo showing location and part of the GOES live heat signature. Second is a shot from the Somerset cam which is centered on the Camp Creek drainage. Third is from the Mt. Danaher cam looking at the same area. 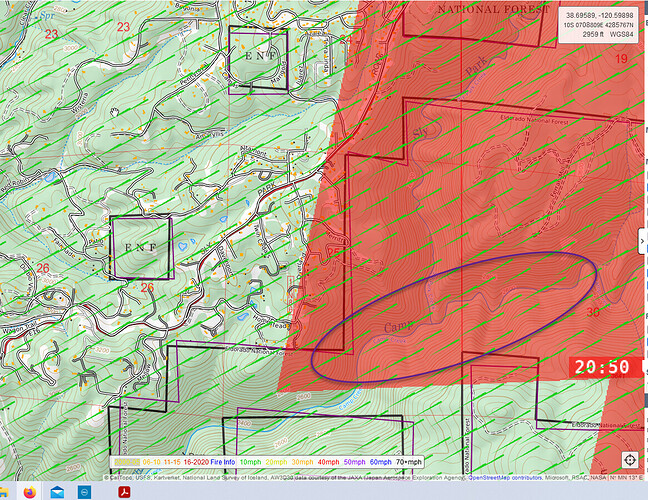 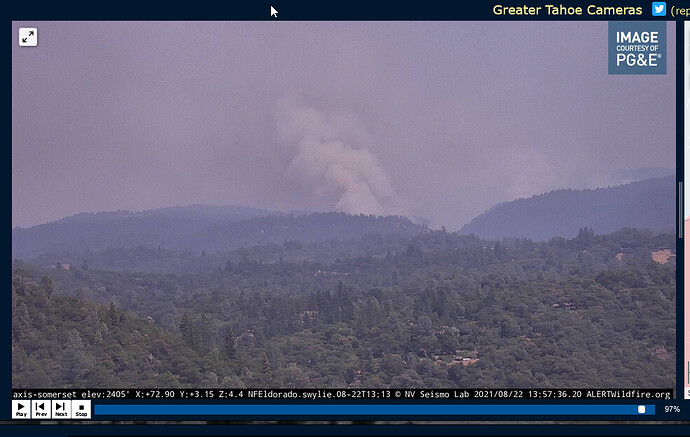 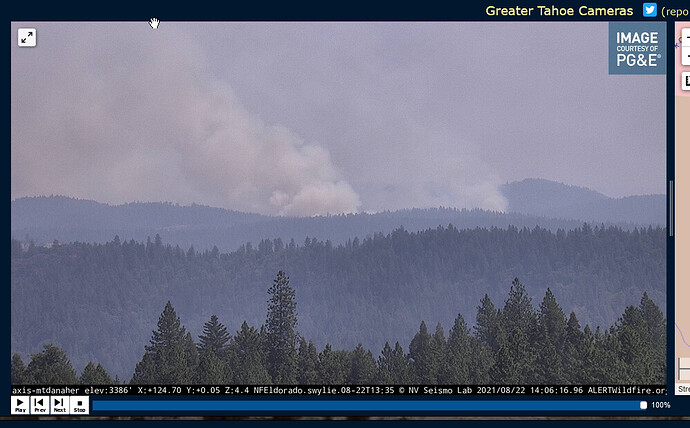 With fixed wing visibly dropping on the ridge top, a spot just took on the Leek Springs Cam. 13:55 hrs.

9110, on that first picture/topo map, is that depicting wind speed or heat? Active fire location?

Some spotting on the Armstrong cams as well.