Most recent fire hx for black mountain was 2016 or 2017 goose fire. Anyone know if it’s in that burn scar yet?

It might be just into that at the head or left flank, that fire burned both sides of the ridge around the radio tower.

New start they might be loosing the tankers to…
See this south of Santa Ana, signal hill 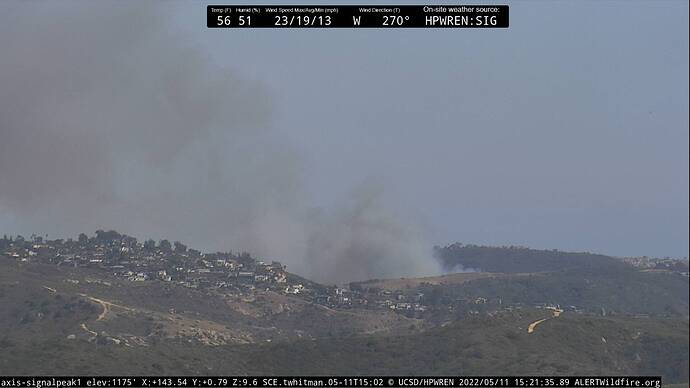 They were losing tankers to a fire near Independence.

THat is the ORC-Coastal incident.

No it is not. It has to come over the top of Black mountain before it reaches the Goose

Looking through my pictures the goose fire burned on both sides of the ridge but not much over on to the south side, anyways this fire hasn’t made it even that far up the mountain.

I traveled down Hwy 99 and it had a good head and may plume later today. I was near the San Joaquin River bridge when I saws it.

ABC30
FRESNO, Calif. (KFSN) – The Fresno County Sheriff’s Office has issued an evacuation warning for some residents as crews battle a wildfire spreading in their neighborhood.

Officials say a US Forest Service firefighter had to be airlifted to a nearby hospital with minor injuries after being hit by a boulder during the firefight. A CAL FIRE firefighter also suffered a shoulder injury and will be taken to the hospital for treatment.

The fire, named the House Fire, broke out at about 12:30 pm in the area of Tollhouse Road and Pittman Hill Road (near Humphreys Station)