Sept 9th
CIIMT5 has taken over the northern two of fires of the TGU/MNF complexes, the Elkhorn Fire and Hopkins Fire. They are calling it the Rock Complex. MNF August Complex has everything to the south still.

The line between SHF Rock and MNF August is the Township 25/26 line off Mt. Diablo Meridian. Not sure if that holds to the west into the T4/5S on the Humboldt Meridian as the “Hopkins” is now below that line at Island Mountain on the Eel River.

Comm plan is a mess with the Hopkins spread to the west. CDF CMD7 will still cover the east side, but as they go west they need to hit both SHF and SRF Forest Nets and ask for assistance if there is an emergency.

Aircraft - Orland Helibase is closing and moving aircraft up to Red Bluff.

ICP will move from Tehama Fairgrounds to the Holiday Inn.

Fire update - no IR flight last night, but ground intel says the “Elkhorn” and “Doe” burned together last night with a successful operation in the old Div YY/ZZ burning off the M22 road. It’s holding, other than a few slops that they were chasing yesterday through the night. A significant slop is down off the Riley Ridge. That’ll be MNF-August and TGU’s problem. To the north, ground intel says they believe Elkhorn and Hopkins burned together. MODIS/VIIRS hits back that up.

Moving to the west, it is in the Island Mountain area off Eel River in the HUU. That change in “vegetation” should really help the fire “chill” out. Northern progression sounds like community of Ruth, south of Ruth Lake. Southern progression is about 3mi north of the Trinity/Mendocino County lines.

(9/11 Rock Complex has become North Zone of August Complex, changed title instead of yet another thread) 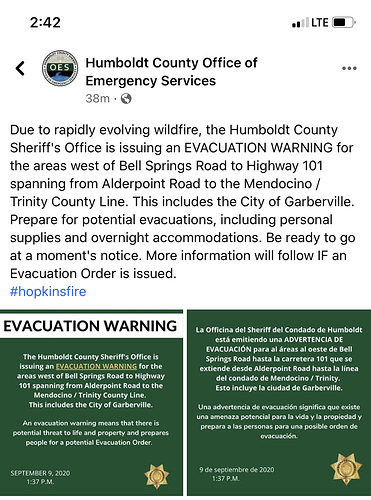 The terrain and “vegetation” that the fire is moving into is ridge-rolling hills, comprised of oak and grass. Mix in Manzanita and the strands of pine/redwood stands and this should move fast. Especially if the winds are pushing it. The hourly NWS forecast looks favorable. If the fuels cooperate, Garberville may not have to evacuate. Ruth’s big problem is that it is remote with few ways to get in and out. If it gets into the Eel River drainage, it will turn more north and probably slow. Any way you look at it, it is very dry out there…and there are few resources. Expect it to grow significantly.

Based on your helpful information that the fire is in Island Mountain, I take it the fire has now crossed the Eel River?

I have not seen it cross the Eel up there, but it appears to be pretty close to river edge on the east side, just north of the Island Mountain area, in the Kekewaka and Boulder Creek drainages.

On 9/9, TGU-Elkhorn became the SHF-Elkhorn and part of a new SHF-Rock Complex that incorporated the Hopkins fire from MNF as well. Now on 9/11 the Rock Complex came back to its roots, and is now the North Zone of the MNF-August Complex.

Thx norcalscan, I was just searching the list for the SHF-Rock Complex (in regards to the Elkhorn) I have family up that way. Well, the way these fires are going, I have family/dear friends affected just about everywhere (sigh) 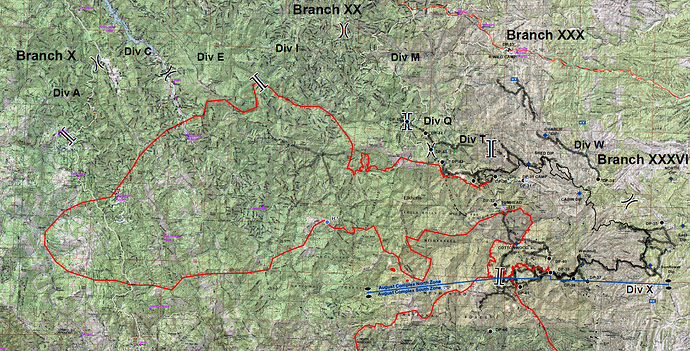 Has anyone been able to get a recent IAP from this incident?

No updates on the August complex for a couple of days. Anybody got a new info ?

LNU just toned out an immediate need strike team to meet at the Mendocino fairgrounds. Its got to be doin something unless the oak somehow slopped.

The West Zone of this complex is established now.

Also yesterday they had a significant slop on the NE side of SouthFork Mtn behind Horse Ridge and below Pickett Peak, slightly flanking just E of Forest Glen. Had minimal resources to pick it up. Eventually ahead of this with the south winds is Post Mountain community.

I don’t think it’s the Oak.

Son is headed that way. Any suggestions on where to get info?

I think they are making plans for when it gets to state land, it’s still moving westward with some pretty good umph

It’s on SRA near kettenpom

I think more along the lines of Covelo, Willits, Potter Valley areas

The Oak is out and the resources have been transitioned. In IROC the name of the CDF incident is August Complex West Zone
CalFire Team 5 is at Ukiah fairgrounds
CalFire Team 3 is at a camp referred to as Eel River which is in Redway
A spike camp is established in Covelo

Depending on which zone of the august, if in the north or south, Mendocino, Shasta Trinity, & Six Rivers national forests all have Facebook pages & are doing live stream events usually about 7pm. But can be watched whenever.