This thing is crankin and got to love the rockies its gonna snow in a day or two. 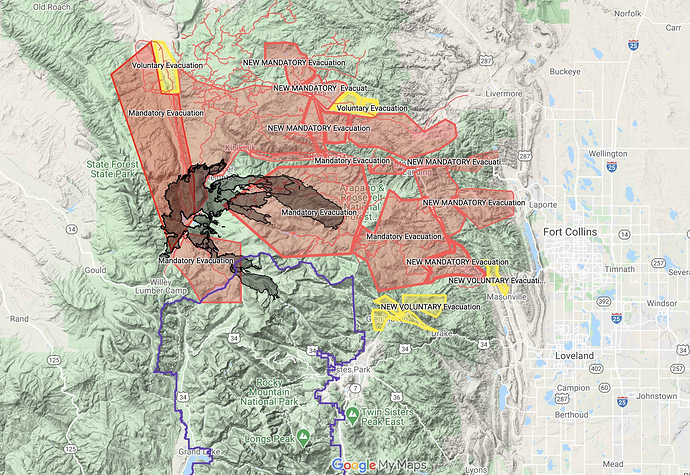 When it snows in Denver it blows in SoCal.
And that’s how things are setting up.

The fire made a large run today and still active tonight due to very strong winds, which are supposed to increase in strength through morning. 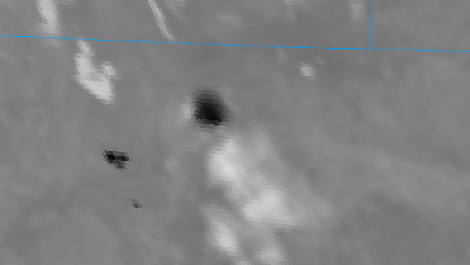 Can’t sleep tonight as I listen to the wind from Fort Collins…have not logged on since last year. I was a little surprised to see so few posts on this fire. It has made a number of significant runs since it started in August. Tonight many people from Ft Collins and Loveland can see flame fronts from their back porches, with a warm Chinook Wind (regional adiabatic winds) blowing in from the west.

There was a short reprieve in the weather on Thursday/Friday but the winds have picked up with sustained 30+ mph gusts since about 2200 yesterday (Friday 10/16) with another wind event coming at 0600 Saturday morning (this isn’t even the actual wind event front yet). 50+ mph winds are again predicted with this event lasting until approximately 1800 Saturday evening. It is now moving into heavy WUI areas and butting up against some densely populated areas of the Front Range. There is no predicted precipitation through the end of October. National resources are stretched thin right now and they have had a hard time filling orders this week with crews timing out from the fire on their last assignment of the season.

It has dodged a lot of big fires over the last 20 years but tonight but the place I’ve always called home, Stringtown Gulch is burning…we leave it all in Mother Nature’s hands.

This story map was created with the Story Map Series application in ArcGIS Online.

Thanks for the news. We see the aircraft flying and know there are three fires (CA-MNF, AZ-PNF and this fire) left truly burning in the US, but we see very little fire news from CO and this certainly doesn’t sound good. I wish you and the people in the path of this fire well.

Yes…one would think a fire like this would be getting a little more attention. Even our own local news stations are not really reporting about it, it was a 30 second blurb on the 9/10 o’clock news broadcasts last night. I think it’s just the end of the season and everyone is over fires this year, things are more focused on other national issues like the election and the pandemic right now. Governor Polis made sure the state had extra funding to have additional air resources stationed out of Jefferson Air Base this year, so we’ve had some extra SEATS, Sky Crane and other mix of T1/T2 air resources (both rotor and fixed) available to us all season. The idea was to hit em hard early and keep them small to reduce the need for large fire camps because of Covid…so much for that, but it was a nice idea. The fire has plenty of air resources, they just keep getting grounded because of winds. These Chinook Winds ahead of cold fronts are common this time of year. The bigger issue seems to be ground resources, like they couldn’t do a large burnout op in one area on Thursday during that window where we got a break from the wind because they didn’t have enough IHC crews or strike teams to hold things.

It made a hard push on Masonville and towards the west side of Loveland, and the communities of Glen Haven, Drake, Storm Mountain and Cedar Park up the Hwy 34 corridor yesterday but crews were able to mostly stay engaged all day and saved a lot of structures. The wind event lasted until about 1800 as predicted but they did not get the 50+ mph sustained winds that were predicted, it stayed around 30-40 mph in most areas which was enough. There is a large spot on the NE side that went through Buckskin Heights towards Redstone Canyon. Cold front moved in overnight and we woke up to overcast skies a little wet stuff on the ground in town today- inversion is keeping clouds and moisture below 8,000 feet, sunny and clear above 8,000 feet. It will clear up as the inversion lifts with more possible wind tonight.

The fire burned through my family’s property some time Friday night. My dad is a stubborn old man and only left for brief periods of time when it was unsafe this week. His home and our family cabin are still standing today, they only lost an outbuilding for horses. He did mitigation work up there for the last 20 years and it paid off, looks like fire behavior moderated significantly through our 40 acre property and burn out op that was done on Friday saved some homes up there.

There has been an increase in fire activity west of Pingree Park. Structure protection remains in place in the event fire activity begins to threaten structures in this area. The fire has spotted south of the North Fork Trail in Division X. The spot is currently estimated at 25 acres and is established. With the current and predicted winds, the fire is flanking, as it has done in the past, and is making a run to the east near Glen Haven and is approaching Highway 34- note that this directly impacts the escape routes from Estes which is being completely evacuated. Crews have been pulled back due to the increased fire activity.

We finally got snow, northern portions of the fire around Red Feather Lakes have received more than the southern portion in the Buckhorn and Highway 34 corridor…but we are getting relief. People in Northern Colorado have never been so happy to see snow in their lives. Winter Storm Warning in effect through tomorrow morning with temps down in the teens/single digits and a good 6-12" of snow predicted. It is a dry snow though, local meteorologist said it had almost no moisture content. We will move back into a warming/drying trend next week and will be back up in the 60’s by next weekend, with Chinook wind events always a possibility this time of year.

We had another wind event across the fire area yesterday, but the snow from last weekend allowed for some fuels recovery so that while there was some increased activity along the southeast portion of the fire along the Highway 34 corridor and the East Troublesome/Thompson Zone up near Estes Park- it did not have a huge impact on fire behavior. The most activity was mainly on the southern aspects of the Thompson Zone up around Estes and they seem to be focusing ground resources up there. Watching the update from the fire behavior analyst, ERC’s were at historic highs in 95-97% percentile all through the later part of September and into October which is why those wind events were so catastrophic and allowed the fire to make unfathomable runs. Those ERC’s are now back down around 50%, so while the snow we got did not have a high moisture content it did provide recovery.

We will be in a warming/drying trend again all week (it’s going to be almost shorts weather again here today in town) which will actually help firefighters a great deal, because they need it to dry out the roads and allow access so they can get all the resources that have been coming in from all regions in the last week to actually get some good containment on the fire.