Just was looking over the NEU-BRIDGE incident and saw this on the ADSBExchange site and thought I’d post this.

I know the guys on ground are the backbone of getting fires out, but the Air Attack out Grass Valley is a very busy place I can imagine.

This is all after already being over the BRIDGE incident most of the morning and just returning back to base at about 12:00 p.m.

At approximately 12:15 p.m. Air Attack requested with one helicopter to the town of NEU-KIBBIE Kibbie in Yuba County arriving about 10 minutes later and requesting a tanker from the same base. After all appears clear at about 1:20 p.m. they head to the NEU-BRIDGE fire.

After doing a few circles they head back to base at about 1:45 pm. About half way back to base, a flareup occurs on the BRIDGE fire and they turn-around to provide assistance. After a few minutes monitoring over the BRIDGE they are diverted to a new start, trailer fire with potential extension to wildland with a full response on order NEU-SCOTTS. Air Attack begins their response at about 1:55 p.m.

They arrive at about 2:03 p.m. and work on the incident until about 2:15 p.m. in a monitoring state as locals resources will able to handle the incident releasing them from the incident and returning to base shortly after 2:20 p.m.

Three separate incidents in less than a 2 hour span, and this is just normal day for them. While monitoring the radio, there was a potential for 2 others that could have just as easily needed AA support but were quickly stopped. 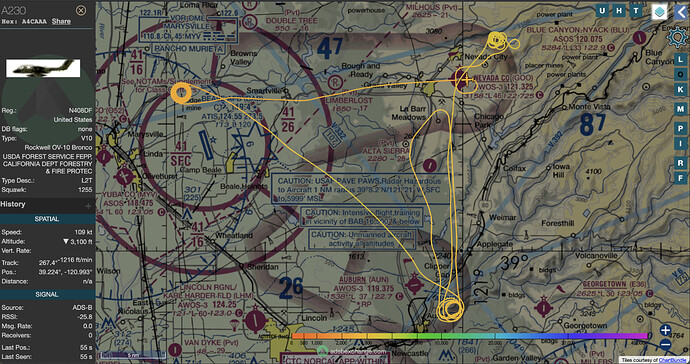 Just wanted to say “Nice work” and a huge “THANK YOU” to the air and ground resources that continuously respond to keep our wildlands and communities safe.

Good ol GVAAB. Best base in the west. She stands pronounced over the heart of the Gold Country looking down over her thirsty land ready to let go the props of war.