Point Reyes contracted its fire program to MRN, no more NPS fire on the point.

The GACC shows this incident as federal, which makes sense because of land ownership, regardless of DPA. There is a federal team ordered to manage the incident, and the NPS will be paying the bill. It’s all about a $, MRN is currently managing the incident, but they will not be responsible for cost. It should probably be changed back to RNP

North Ops News & Notes shows it as RNP. Its not who has protection responsibility, it’s the agency that “owns” the land, at least in this case.

All of the documents available, and there aren’t many show this to be RNP. The agency identifier has been changed to RNP.

Marin County Fire provides Initial attack on all National Park Lands in Marin. That includes Golden Gate National Recreation Area, Muir Woods National Monument and the Point Reyes National Seashore under contract. It has never been a DPA swap. Over the decades MCFD and the PRNS have had a close working relationship regarding all emergency response, rescue, medical wild and structure fire. The 19195 Vision Fire which I was involved from IA to the last DEMOBE went very well. The waiver for use of dozers was in-place within hours of the run to the south.

2 posts were split to a new topic: CA-MRN-Sleeping Beauty??

Things looked great until an hour ago. South west wind hit the north flank, reports (unconfirmed) already across contingency lines. It will be running into SRA and the Paradise Ranch Estates to the northeast. Unbelievably thick bishop pine from the 1995 Vision Fire. Recent view from Black Mt. and Mt. Vision Cams. 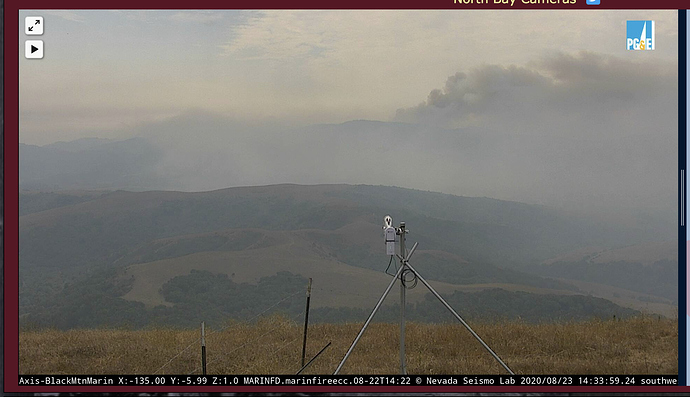 From Mt Barnaby at 11 PM. Has been very active since mid day, showing on MODIS, no info from the Incident 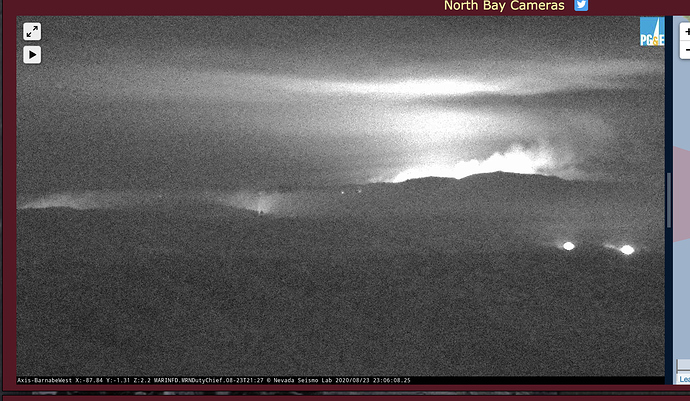 Still been cooking all day. Anyone have an update?

Pushing at the NE corner, Ops sound confident they can hold the prepped line at Lamantour Rd. The weather Station at Mt. Vision a couple miles north at the same elevation is 52, 68% wind 8 gust to 13 (listed as Drakes View Drive). Fuel Moisture is fairly high as is usual for that area of the coast. Tankers and copters assigned. Structures are a short distance to the north, so hopefully they hold.

I just got in from the line tonight, so I can help with an update. Div Charlie, which was the heel, is starting to act more like the left flank. Over the last several days the fire spotted and chewed through the retardant. It burned through the Santa Maria Creek drainage, and ran up and over the next predominant ridge to the west, and is now established in the Coast Camp Creek drainage. The threat here is the alignment with a SW wind under the Drakes View, Drakes Summit area, north of Limantour Rd. Div Echo pushed up and over Helispot 1, west shoulder of Mt. Wittenburg. Talking to the Dozer Grp., the fire is bumping the Z-Ranch Rd. They pushed out the Meadow Trail much of the day in Div Tango (east shoulder of Mt. Wittenburg. The fire is over the Meadow Trail and burning towards the Mt. Wittenburg Trail. The Scoopers worked this area under Mt. Wittenburg until cut-off. This afternoon, a strong onshore push caused the fire to spot as far as the mowed field adjacent to the engine parking at Incident Base (Bear Valley Visitor’s Center). Rotor wing worked several more spots 1/4 mile southwest of incident base, near the Mt Wittenburg Trail until cut-off. Minimal activity in Div Whiskey. We constructed line to lock in that corner where the Bear Valley Trail meets the Coast Trail the first four days of the fire. Line construction and firing handled by 9152C and 9151G. Div Zulu is holding fast at the Pacific. This fire isn’t going out any time soon due to tough access and fuel loading.

Yup. I’ve been there every day since the afternoon of the 17th. I was also in the Drakes View area the first evening of the Vision Fire. Lots of fuels and a tough place to conduct suppression operations.

Thanks, that is the first good line intel on this fire. I have had concerns from the beginning that due to the relatively low ROS and high RH that this fire was under estimated from the get go. Wish you all luck butting up everything before a weather event arrives. Stay Safe, pass some of your knowledge to the young ones

Got off the line last night, and demobed today. Yesterday morning did not start well. A Fire Storm crew (from Chico), and 2141C (Marin LG) started to work a spot fire from the night before, over the Bear Valley Trail on the south side. A weakened bay tree split and fell, striking two crew members from Fire Storm. One member was trapped under the tree, and seizing. The crew and engine companies extricated both patients and started rendering care. One had shoulder and clavicle injuries, the other was now unconscious. Medical and rescue copters were unable to get in due to fog. They were transported by M-94 from Pt. Reyes, and the incident ALS rig. It was 32 minutes from the time the tree fell, to when the last patient was enroute to the hospital. Truly a heroic effort by everybody involved. Update today was looking better for both. CT scans were clear, both patients alert and oriented. Peer support teams from Marin County Fire Dept., and CalFire provided defusing, and feeding later for Fire Storm and 2141C. A fantastic service to these folks, who really needed it. These guys were rocked, but are doing better. The entire night of the initial spot fire, and all day yesterday trees were coming down across BVT, and in the black up to 6’ in diameter. Fallers had been ordered by the team, but are still unavailable. Many of these trees have been burning for 72 hours or more, and are not healthy. There is a lot of good work being done by the copters in there, but the drops are causing more to come down. Stay clear, go slow, this is a marathon, the emergency is over.

Thank you fellow firefighters for helping your brothers. A common cause was seen and everyone stepped up to help a fallen brother, extricated him quickly, up Bear Valley, and up and over the hill into Greenbrea. Awesome Job and Teamwork.

Smoke showing from the Woodward 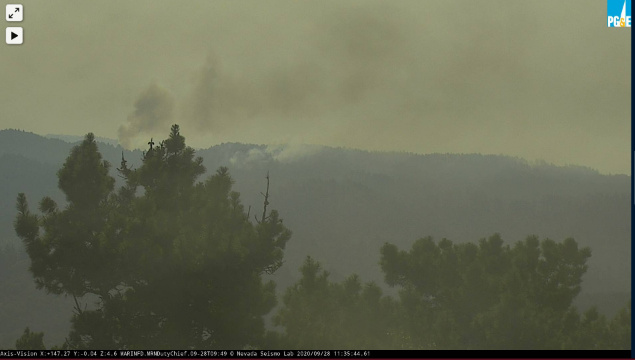