There are many wildland oracles on this platform. With the data we have at hand:

Can one speak conjectures on where Sierra Fire will end up or be held? Are we looking at unsteady containment till the rains (or at least late fall nights) arrive? There are no absolutes, I agree. But general idea of what this Beastie will do?

I’ll let the mods decide. It is a question (s) for a particular incident in California. I did, at the request of a mod, take it out of the general questions for CA-ENF-Caldor? 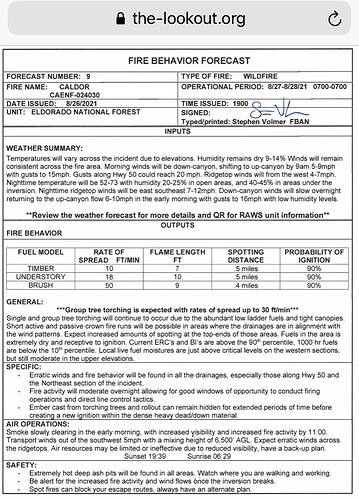 With Red Flag warning and more winds coming in the future it makes one wonder how big this fire will grow? What will the box size become? The winds are a curse and a blessing. It will create clear skies for aircraft to attack the flanks and hold one side but it may change the course of the active fire and create new heads. The fire fight has been mostly the East and West flank but could this change? What kind of growth will be see in the size of this fire? Will this wind be enough to push it over the crest?

The Troublesome Fire last year crested the Rockies but there was a team on the other side that was able to handle it and then a day later 23 inches of snow fell. No moisture is forecast in the immediate future for this to happen. Will this be an inside slider like the previous wind event? Looking at Windy.com the winds could push it east and north which looks very Troublesome like. The Clover fire in 2008 on the Sequoia crested and burned to 395.

The fire has made some good runs to the SE with brief periods of NW winds - having all that hot flank has given it plenty of opportunities to squirt out where alignment was good. Think we’ll see some more of this action with any NW winds - SE fingers becoming new heads that end up pushing back to NE with prevailing SW flow.

The SE side is kind of the neglected one, but IMHO has a lot of potential for major spread. I was just talking to 1980s Eldorado IHC Supt Barry Callenberger, though, and he said north winds aren’t as much an issue here til quite a bit later in season. Anyone want to chime in on autumn winds here?

It has already pretty much outflanked Caples Burn, has a lot amount of open country out to the south and east. 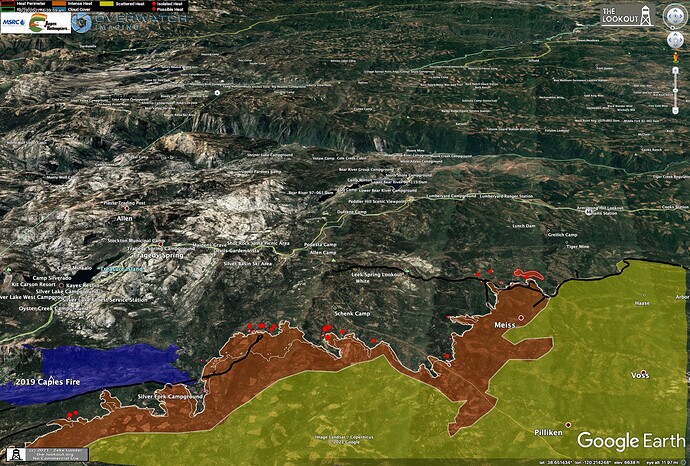 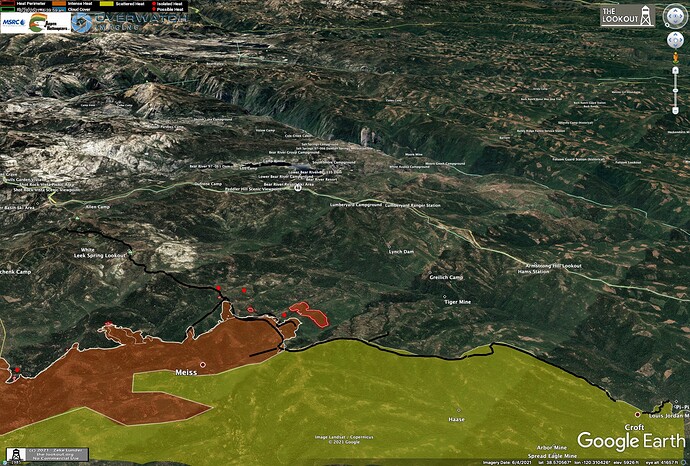 Regarding spread toward Tahoe, I am most worried about the alignment the fire will come into once it gets past Twin Bridges. If it becomes established around Camp Sacramento, it will have the whole basin of Sierra-at-Tahoe above it where upcanyon winds, terrain, and fuels align. 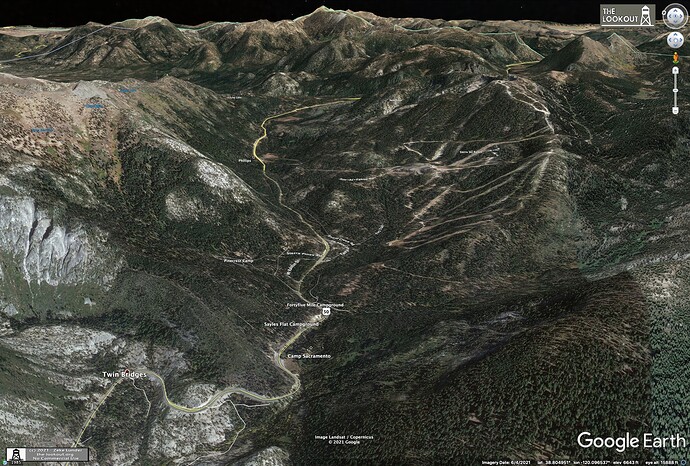 Still a lot of terrain between there and Echo Summit that is sheltered from upcanyon winds, with sparse fuels. With smoke laying in heavy after each day’s major run, followed by a couple hours activity each afternoon on following day, it seems like this slow motion train wreck could really drag out for a long time. 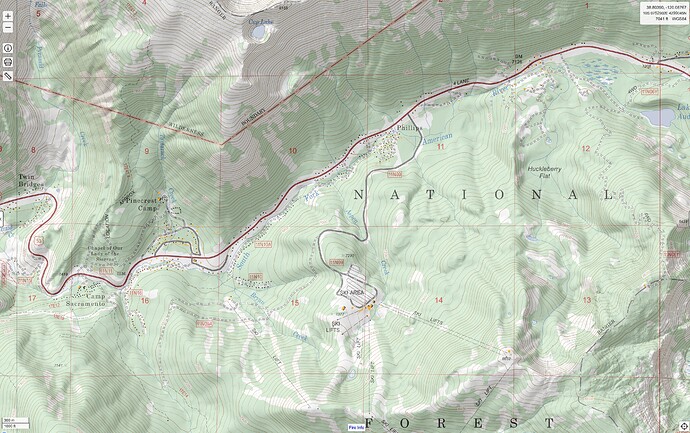 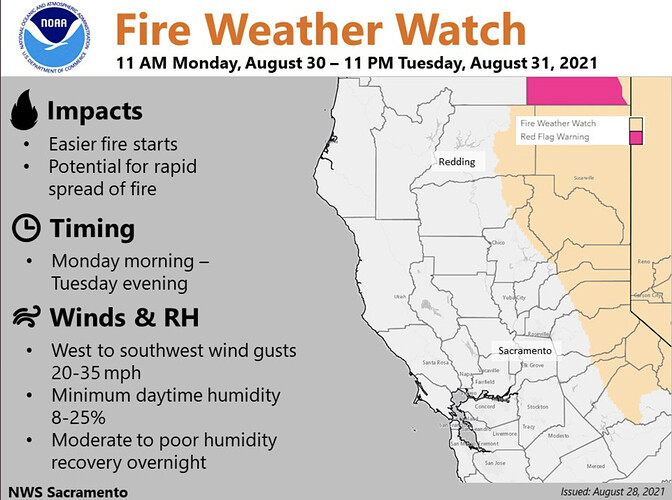 Confusion here…Caldor??? or Caldor Future? Caldor??? allows for speculations and estimates where it is going. I’m not sure the purpose of the Caldor Future? page. Perhaps the old folks need some enlightenment…

I believe he was just fishing for professional opinions from the “oracles” (people who are in the know) on what this fire is capable of at this point. Mostly professional speculation obviously, and this site is full of people who can offer insight. The “been there, done that folks” combined with the some of the best weather geeks that I’ve had the pleasure to be informed by.

I’m kind of at a loss at how Cal Fire’s morning public briefing video can gloss over seriousness of yesterday’s spot over to South side of Strawberry and subsequent slope driven run to SE, and spotting above Lovers Leap. It seems clear to me the Sierra-At-Tahoe basin will burn, and there’s nowhere to hold the fire to the east now.

I watched the briefing and your description is accurate. Admittedly, the ski runs themselves provide the beginnings of some ready made fire breaks, however without holding forces distributed they will be very difficult to defend. With the caveat that we obviously do not know the inside scoop, hopefully, the IAP and the maps I’ve seen are not what they are currently working off of.

I’d urge people to who have not done so yet to sign up with the Sheriffs Evac warnings.

Understand about Sierra-At-Tahoe (where I learned how to ski) but what about heading up Tamarack Creek drainage on the north side? Granite should hold er up from sloping over to the Echo area (where I learned how to water ski)…Been a while since I hiked the Ralston Peak area (30 years) so not sure on current fuel loading on the SW side.

Given the conditions, I don’t think we have time to make anything work on the east side of the fire, in general. Look at the Armstrong Webcam 3 hour loop. No dozer line is stopping that.

Working with CalFire on the Dixie West, I’ve noticed they have a stronger tendency to choose verbage that engenders a sense of security, to put it nicely. Not that I neccesarily agree(or disagree) with that strategy, but public health does include emotional health, and IMO, often the collective emotional reaction to the fire is as damaging as the fire itself.

Between the King fire and this fire, what percentage of the ENF has yet to be burned?

This is terrain drive along with diurnal winds. Not looking good for the future. Exceptional fire behavior on the way. Get out of the way and follow evacuation warnings!

With the fire moving further to the east there will be a lot of micro climates, valleys, and terrain it moves into and could alter the direction at some point. Each valley it enters get different rain shadow effects with more drier conditions and sometimes even higher humidities. Also a lot of very rugged geography that could alter direction? What kind of distance runs can we expect today? For fire behavior we have the Tamarack as measure of possible similar fire behavior.

Seeing how such a large percentage of Eldorado County and National Forest has burned, what is the criteria and when does a governor declare a national state of emergency. This in combination with Monument, Dixie Tamarack have displace thousands. I haven’t counted up the numbers but it is staggering just for El Do county