Here is a snip of the proposed MOU changes for CALFIRE’s members. So much for the 48/96 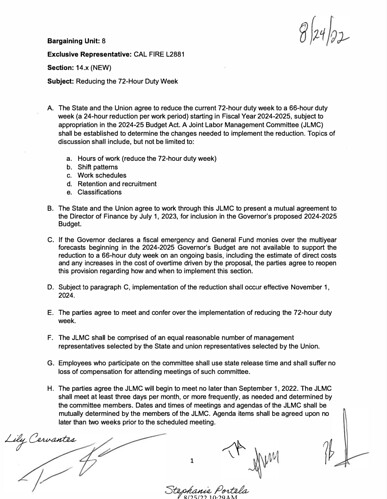 Someone break this down for me please
Also thanks for posting this [CDF_NYP]
Beware of an FBI raid now.

Hoping it’s a different interpretation of the 48/96!! Never heard of a 66 hour duty week

That’s what I’m gathering, but on a rotating schedule or what? Leave it to us to come up with a new plan nobody has heard of.

Looks like it’s a step towards easing into a 56, maybe… over years!!!

But is this a trade off of no COLA at least to keep up with inflation, for the possibility of a reduced WW? Or is this just one piece of the negotiations?

I’m used to seeing the whole package at the same time, not bits and pieces. So gotta ask… Is that it?

I believe the attached PDF only includes portions of the mou that have changes. The 66 is weird but maybe it’s getting us towards that 56.

How does this fit into a Capt B schedule?

Not sure, but I’ve heard talk of FC-B’s(non credible at all) were possibly going to the 72 and would keep percentage increase in level of supervision # of firefighters assigned. Of course that’s here say but would make sense with fft1 crews

It doesn’t show shift pattern 1 available for FCB. What you are saying would make sense though.

It appears to be unchanged… either 5 days or 4 days. I think they forgot to account for that or they are relying on their FAE’s 3 days to supervise

Maybe 3 72 shifts then a 48 per period. Says committee to meet once a month to come up with plan. And note if funded by budget language

The 66 hour work week is what throws things off. Maybe they’ll release a little more info after they meet

And the end of the FCB era shows it’s head.

FCB 10% wage increase, originally AR-40, was compensation for the clientele being supervised cdcr/ccc. Recently modified to be compensation for span of control for some ff crew, and CNA.
Well with the advent and permanent funding of FAE, that span of control is tipped now kids. CNA guys know when their ffs go away and FAE come on board, the FC will then be FCA on straight 72. Bet you can guess what wish going to happen with the CCC crews when FAE come on board and lastly why would the agency keep a FCB on a 4 day on ff crews when everyone else is on a 3 day and span of control is reduced?

Feel free to call me on it, but I recall the 10% was for cdcr, ccc and cng supervision. FF1’s are the only personnel not listed in the language, so FCA’s can fill the crew boss roll for FF1’s.

FCB’s will get burnt if regularly forced OT to cover FCA positions on crews or in stations since there is no reciprocity from FCA’s to cover inmate crews. Historically, the camps maintain a separate OT and Mando list from the rest of the unit. It has been talked about to include FCB’s in the FCA’s mando list. Think about including personnel from ECC, Prev, Dozer Operatators, Forestry Aids, Helitak, Tanker Base… anybody that has been to FFA and COA, onto the station mando list. Think it would adversely impact their programs? Yeah, and it would adversely impact the camp programs, too.

There’s no question an FCB can fill an FCA staffing vacancy. But the other way around doesn’t work if the FCA hasn’t had the required Crew Admin and Ops modules, hasnt completed the task book sign offs for FCB and hasnt been evaluated and ok’d to supervise inmates on work projects and fireline. Can’t do it. That’s a CDCR requirement.

An FCB is required to read and acknowledge understanding of ALL of CDCR’s Admin and Ops policy manuals, too. Anybody have a couple solid weeks or more to kill?

In the end, the objective is to put a crew to work building line, or doing beneficial project work. It doesn’t matter what color uniform or patch they’re wearing. It’d be a shame, though, to give up the hard fought 10% without some kind of compensation. Something was given up to get that 10%.

Recent informal polling has shown that most FCB’s do not want the straight 72, so there’s that, too.

I’ll preface this comment by saying I think L2881 did well with addressing some of the nickels and dimes of the benefits package. To me, thumbs up on the education, health care, OPEB, and longevity aspects. We’ve got to make gains anywhere we can.

That said, I’m torn on the 66 hour week. Is this a necessary first step toward a 56 or does CalHR think a 66 fixes all the problems and they think it’s roses and daisies from here on out?

Personally, I would have much rather seen a definitive path to a 56, like they did with getting the FFIs and BCs off the 72 hour OT divisor. Maybe a 2 or 3 year transition to a 56 or something like that.

However, my biggest concern with the 66 hour week is less about the actual schedule worked (although that is still a huge concern) than it is the effect on our EDWC.

President Edwards and L2881 have been vocal about achieving a 56 with no loss of compensation, however I see nowhere in the Tenative Agreement or Summary on CalHRs web site that EDWC will be preserved.

The Summary clearly points out the “24 hour reduction per work period”. Does that mean 24 hours less EDWC? Depending on rank, that’s a difference of $550 to $950 or so less EDWC every 4 weeks. That’s about a 7% to 9% pay cut which pretty much wipes out all the other “gains” of this agreement…let alone taking into account the 8% inflation we’ve experienced the last 12 months.

Not only that, but EDWC is PERSable, so, if true, losing 24 hours EDWC every 4 weeks could negatively affect those who are within a few years of retirement in a big way.

I really hope I’m wrong in thinking EDWC would be affected.

I really wish L2881 would have sent out details instead of the teaser email issued this morning so there wouldn’t be so much rumor and speculation.

I also don’t understand how CalHR’s own 2020 California Firefighter Total Compensation Salary Survey could show a 23.6% lag for CAL FIRE (on a monthly pay basis-some 59.4% when calculated on an hour for hour basis, which I feel is more accurate) yet CalHR thinks a 6.6% increase over 12 months is sufficient to close the gap.

Inflation alone has increased 14% in the 2 years since the survey…and that’s on top of the 59% the survey says we were already behind.

My buddy’s ALS department has a great reputation and great equipment, yet barely gets enough applicants (ALS, BLS, entry, or lateral) to fill an academy even though their entry level BLS positions start at $100,000 for a 56. Recruitment is a huge challenge for most departments statewide-even for well paid municipal departments.

On top of that, the same buddy’s department got 8% this year and 7% next year, which just puts CAL FIRE that much further behind.

Bottom line is that 6.6% does nothing to close the gap. Something big needs to happen or the 2,000 new positions we just got will never be filled.

I really do want to support the agreement, but as far as I can tell, unless 2881 can present a whiz bang explanation and a solid long term plan, I’m not sure I want to vote in favor of it come October.

Will someone please prove me wrong for thinking that way?

Where’s ehoss when you need him? At the end of the the day, “a 24 hour reduction per work period” 48/96, still translates to working 3 days in a week. It was explained to me that the 66 hr was a carrot to dangle to get them to budge and it seems to be working.