I have a question as why Cal Fire has changed their terminology for rates of spread. As far as I know NWCG and CWCG have never posted an official memo one this. Can someone tell me why we are all not using the same terminology for rate of spread anymore? Every NWCG course still has it as the original that is taught, slow, moderate, and rapid. They have recently added critical but the definition is the same as rapid ROS…

Critical rate of spresd should be last.

Personally I’d like to see more creativity in describing ROS.

“It’s rippin’” always worked for me…allegedly CDF CAD (at least it used to) lists that as ‘rate of spread’ term. A large flame front does not indicate a rate of spread. A flame front moving through fuel does.

This thread is a perfect example of trying to fix a problem that does-not exist. The slow, moderate, rapid worked great and everyone used only these three with some qualifying adjectives such as very or extremely fast. Then someone decided rapid is dangerous so we should drop rapid and use dangerous. Fighting fire is dangerous regardless! A slow to moderate ROS that transitions into rapid is far more dangerous than the obviously hauling ass fire. So what was settled terminology is now a mix of terminology so nothing was improved. They did the same to LCES

Yeah, I’m used to the 3 original (slow, moderate, & rapid), however, the last few years I hear slow, moderate, rapid, dangerous, & then critical. I do not know if there’s an official “ROS” policy anywhere, but last year I asked a CF BC what’s the reason of the new terminology. He said that it helps responding CF Chief Officers determine if they need to augment the aircraft amounts &/or engines & HC’s. He says that if LG depts paint a REALLY good Report on Conditions on the radio, they’ll augment the aircraft while enroute. For example, if you state “critical”, “dangerous”, or structures threatened “immediately” or “within minutes”, they’ll bump up the amount of aircraft.

In the calfire manual #??? It’s states
Low = spread potential little to none (paraphrased)
Moderate = less than 1mph
Dangerous = 1-3 mph
Critical = greater than 3 mph
Sorry no manual # I’m sure a calfire person can clarify

CAL FIRE 4300 for years, a lot of folks over estimate ROS. Example, on scene, 5 acres with a critical rate of spread. If your fire is only 5 acres, after first report, CAD and tone out, reflex time. It’s probably moderate to slow. Unless it’s 10 foot wide and a mile long.

It seems like to many times the rate of spread is being over estimated by the first on scene, how offen do you hear 1/4 acre dangerous rate of spread then 10 minutes later fire contained. I’ve heard that numerous times in the last month. In fire training at reedley college our instructor discribed rate of spread in light flashy fuels on flat terrain as you can walk faster(slow), walking at a brisk pace to keep up(moderate), and a jogging to running pace(rapid).

Exactly. We used to teach the term “fire history”, not over the years but in reference to time of ignition, report, dispatch, response times. If the total fire history is 15 minutes from ignition and arrival size is 5 acres, not critical by any measure. The old trap young officers fall into frequently is the old " we had 100 acres of smoke, but only 10 acres of fire…

Early in Fire Season every year, the guesstimates on ROS are inflated and as the season moves onward, those guesstimates tend to flatten out into what is reality. I, like others (probably) have been “counseled” over the years by the Station Captain, the BC or others for not taking a moment to properly size up an incident and provide the true nature of the incident including factual ROS. As our experience grows, our accuracy and meaningful size-up also grows (Hopefully).

I’ll say it again, people seeing large flame lengths, that may or may not be moving much, and translate those flame lengths to dangerous ROS. Is the fire I’m looking at really going to be 3 miles down the road in an hour? Probably not…

This was posted on Twitter about the same time this conversation started. 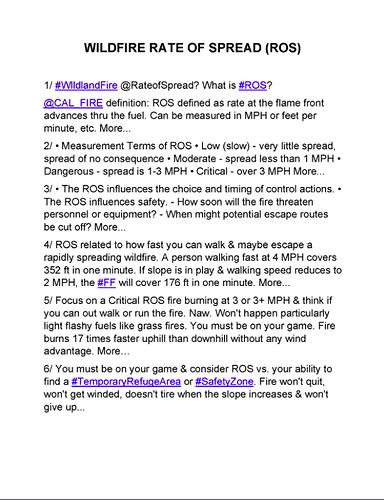 Believe the definitions and changes occurred when the Calfire WUI handbook was introduced. The Slow(0MPH) Moderate (0-1MPH) Dangerous (1-3MPH) Critical (3+MPH) are now taught as part of NFPA & SFT Company Officer 2E. The Company officer series (NFPA 1021 I believe) is now a national standard that is taught and accepted across all 50 states at the SFT level.

Seems like some today, don’t comprehend actual area or size as consumed by the fire. Like a 10 acre fire that’s 300’ wide and 1500’ long, is similar to about 10 football fields side to side.

remember when it was …runnin’ and gunnin’…ripping and a snortin’…a blow in’ and a goin?

Report on conditions from a long time ago: