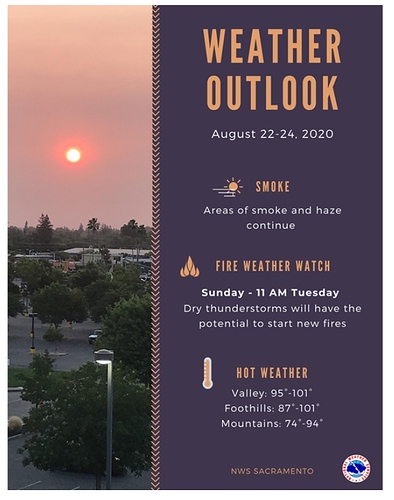 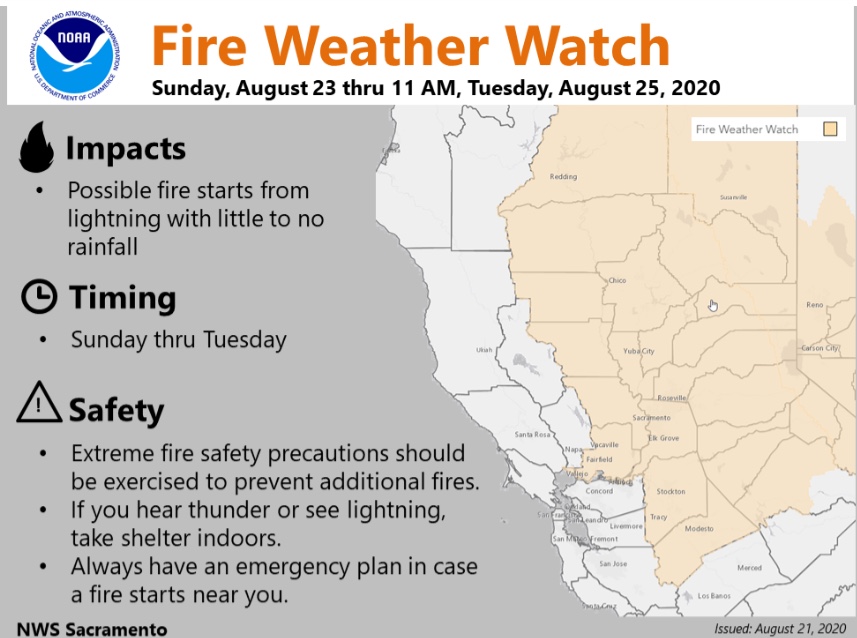 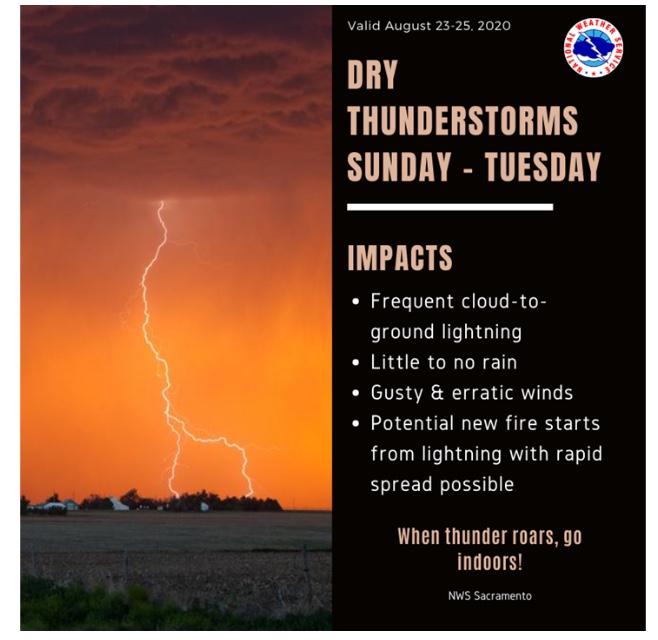 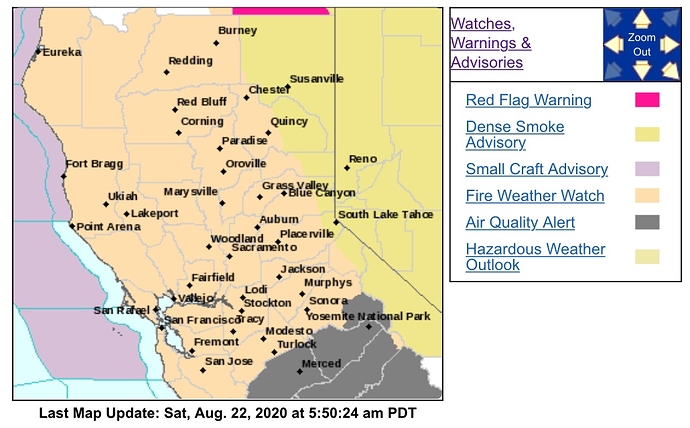 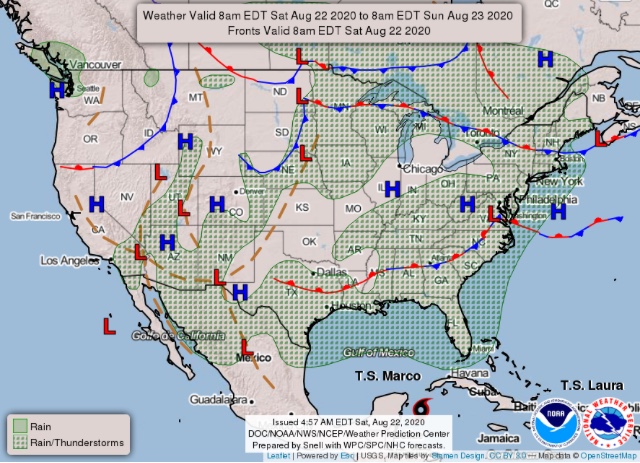 Following the morning fire weather coordination calls with
neighboring and regional offices and resources as well as incident
meteorologists (fire weather experts staged at each major fire),
the plan moving forward this morning is to upgrade the fire **
** weather watch to a red flag warning late this morning, likely
between 1030 and noon, so look for that.

Confidence is increasing
that we will see a period of increased potential for elevated
thunderstorms over the next 72 to 84 hours, however, given that we
are dealing with a disorganized mess of moisture of instability
from the leftovers of the former hurricane, there are a lot of
pockets of favorable and unfavorable thunderstorm “fuel” heading
our way, while the other moving parts that will enhance this fuel
are also coming together in differing ways throughout the duration
of the event. At this time, the most favorable timeframe for this
to occur is roughly midday Sunday through midday Tuesday, however,
even in that time frame there may be a break midday Monday. In
addition, the initial pockets of more favorable air for
thunderstorms will begin to arrive as early as today. KMUX radar
has already detected a few cells well offshore
of the Central Coast with increasingly favorable pockets of air
arriving through the day. That said, we are not expected much
enhancement/upper level support from the neighbor ridge/trough
until at least late Sunday, so we are keeping time periods prior
to Sunday outside of the main concern period as any showers or
thunderstorms that develop are expected to be on the weaker side
and primarily offshore. The initial, primary concern from these
thunderstorms, given the numerous active fires on the ground, is
not the additional potential dry lightning, but the gusty, erratic **
** outflow winds that can be generated from this convection which can **
** be catastrophic to existing fire lines. As such, the timing of the **
** fire weather watch (and by extension, further red flag warning) is
primarily focused around the time period we may see the stronger
showers and thunderstorms capable of producing strong outflow
winds, while the dry lightning threat will be more of a concern in
the wake of passing thunderstorms. As previously mentioned,
locally breezy southwest winds will also be expected during the
afternoon and evenings of the next few days which will further
complicate matters. Dry conditions at the higher elevations will
also exist as a result of the nose of the high pressure pushing
over the region today and tomorrow before exiting early next week.

Generally speaking, the last 24-36 hours and the next 8-12 hours **
** will be most favorable for fire fighting efforts as the last of **
** the marginally cool, wetter air and generally weaker winds are **
** present over the fires. Given the upcoming wind shift in the next
12-24 hours, potential for elevated thunderstorms bringing erratic
gusty winds and dry lightning, and breezy afternoon winds, expect
to see increased activity from the regional wildfires. This may
result in the wildfires moving in directions we haven`t seen yet,
increased smoke production, and potential for new wildfire starts.
New lightning induced wildfire starts may not be immediately
obvious if surface conditions are less favorable for fire spread,
but once windy or dry conditions hit a location, we could see
additional wildfires develop across the region.

Pretty much armageddon is what I’m reading for the next 48-72 hours.

And I was having such a good day off…

Please be sure your crews are well briefed, +coms (many 204’s are not matching the 205’s on several fires I have been on in the last 2 months), and LCES and PACE are in place before engagement. Also, take that tactical pause and re-evaluate when the established plan is not working.

Be safe and stay hydrated my friends.

Not looking favorable at all 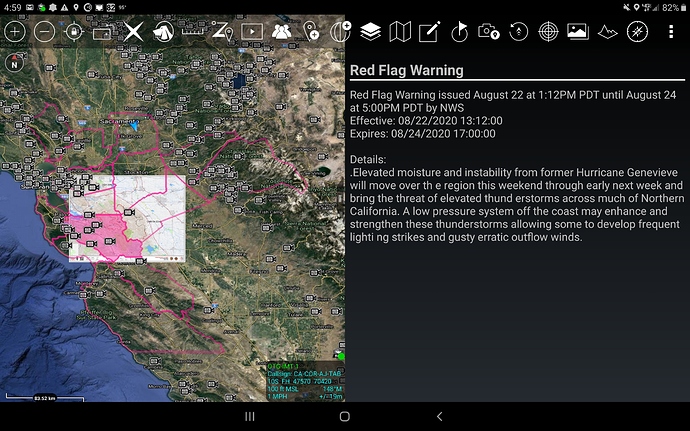 What program is that?

Hi all just wanted to share some info on emerging tech for fire use. Over the last 2 seasons the Android Team Awareness Kit (ATAK) has made its rounds to a handful of fires as a beta program. It was originally brought to the USFS and Prescott Fire Dept. following the Yarnell Hill Fire Fatality as a potential solution on tracking firefighters. See the articles below. It really had not grown legs but for a very small group of very dedicated folks really wanting to champion this. It made it on to … 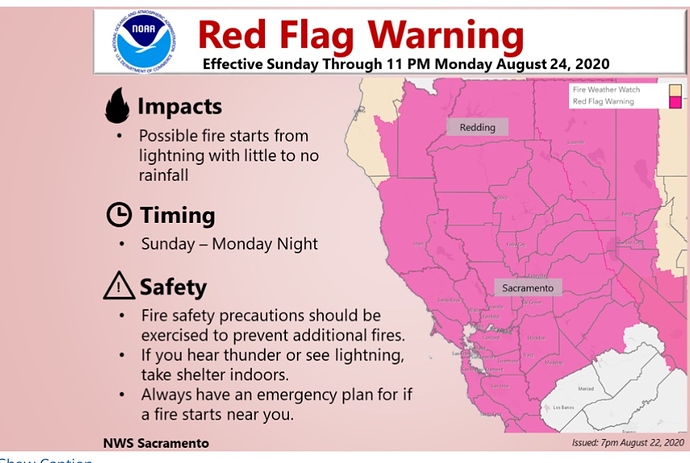 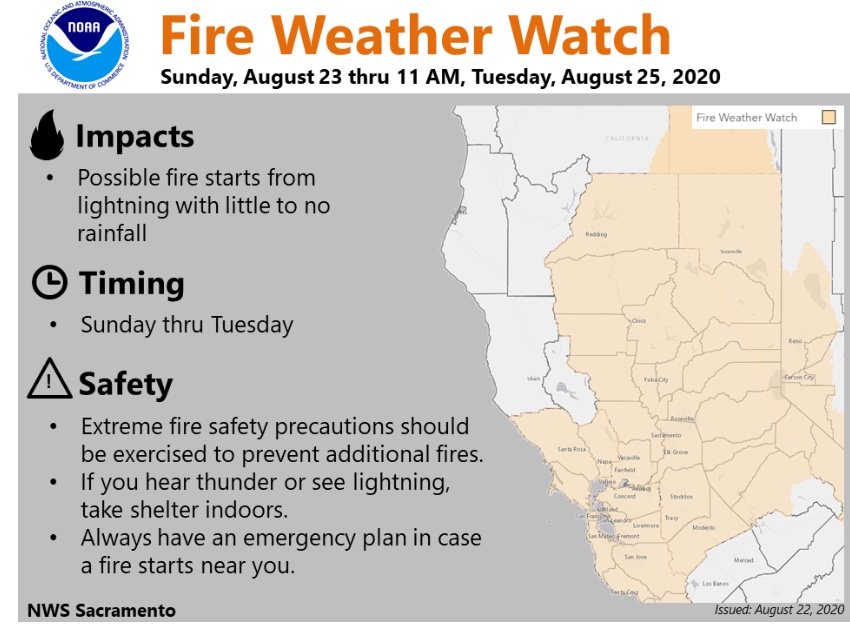 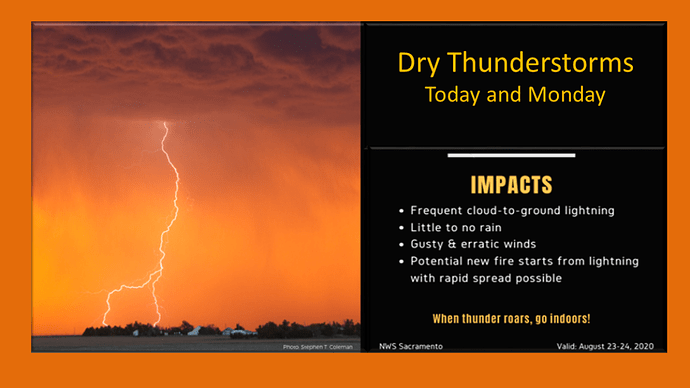 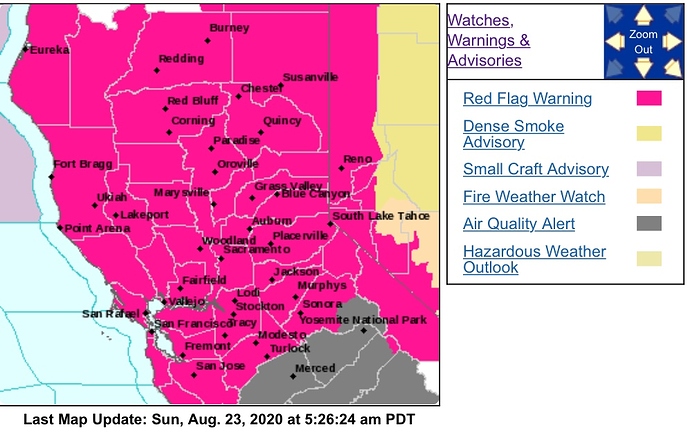 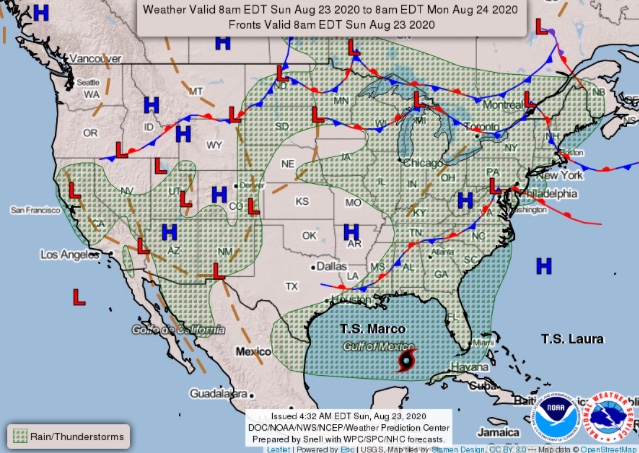 A question for those more knowledgeable, can we expect widespread lifting of the inversion layer over the major fires over the next two days with the coming of an unstable atmosphere?

Indeed, convection should disrupt the inversion and marine layer.

@chukar…Also recognize that as the inversion and marine layers change and lift, there will be a marked increase in the fire activity and behavior. The goal always, is to be able to get aircraft in and place some retardant before the fire behavior becomes intense. So, there are trade-offs that have to be taken into account as the Team’s plan for the changing weather conditions.

Some lightning, but way offshore. 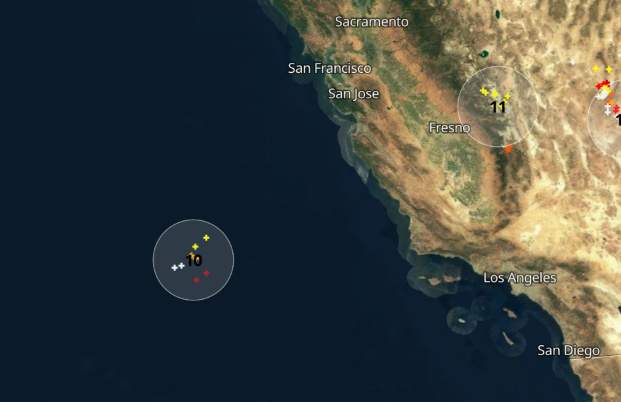 Forecast for the rest of the night from the SPC:

Your input. latest following, to me, seems to be skirting N to NW. what do you and your resources see the change, if any, to projections???

Lightning call on radio but all I see is a single strike near the wind farm by rio vista which creates favorable conditions. Wouldn’t be too sure yet

Looks like the Inyo and Sierra Forest’s getting most of the strikes. The Stanislaus getting hit pretty good also

East side, mostly…we will see tomorrow or???

We are getting sprinkles here in Fresno.

Sounds like it will be like last Monday… Chasing smokes all day long, drawing down resources. Stay safe everyone

I’m not seeing anything on lightning maps in the Bay Area. Am I missing something?